Selling Out For Survival 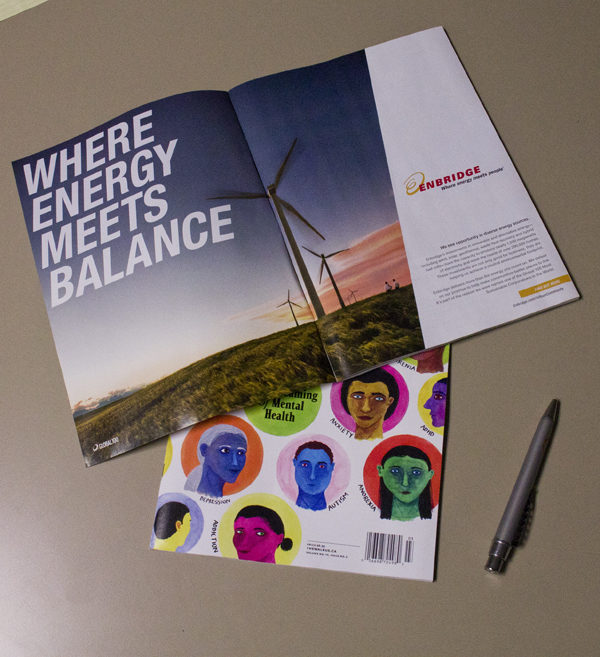 Flip open the front cover of The Walrus magazine’s January/February 2013 issue. On the inside front cover you’ll see a house ad for all the different outlets at which you can find The Walrus content. Fold out that cover, and across the gatefold you’ll see early evening on the Rideau Canal. Dozens of lamps line the way for skaters as they glide under bridges and past  snowbanks, the light glinting from the top of the Château Laurier like the Northern Star. Over top of the purple sky it says, “Where Energy Meets Spirit.” About half of the right-hand page is white, and that’s where you’ll see it—the money behind some of The Walrus’s most expensive advertising space—“Enbridge: Where energy meets people.”

These gatefolds have run in The Walrus for months; earlier issues featuring lush prairie grass covered by miles of solar panels with the slogan “Where Energy Meets Today,” and the most recent issue showing wind turbines rising up against a sunset-lit sky, “Where Energy Meets Balance.” They are ads so large that if one got stuck in your mail slot it would rip the entire cover off, and so expensive—roughly $20,000—that it could probably fund a good chunk of editorial budget. Walrus readers are not pleased,  they do not want to see advertisements from Canada’s largest natural gas distribution company inside their favourite magazine.

Since its creation in 2003, The Walrus has been known as one of Canada’s top magazines for independent, intellectual, and well-written pieces. It has an all-star cast led by editor and co-publisher John Macfarlane and features the best of Canada’s writers every month, such as Margaret Atwood, Chris Jones and, Ron Graham. It’s published by a charitable body that runs on donations, subscription money, and the largesse of various sponsors, and is known for being perennially broke.

Paid advertising helps make magazines possible  says Shelley Ambrose, executive director of the Walrus Foundation and co-publisher of the magazine. “If readers really don’t want advertising, they’ll have to be prepared to pay $150 or more for a subscription.” For Ambrose and the editorial staff that is the bottom line. Readers don’t pay the bills alone, publications rely on advertising too. So, if readers like getting their belovedWalrus every month they have companies like Enbridge to thank for it.

However, to readers the values of Enbridge (whose pipelines carry crude oil, natural gas, and other fossil fuels) seem to be at odds with the values of The Walrus. Enbridge [www.enbridge.com] is corporate. The Walrus is independent. Enbridge has been known to cause damage to the environment. The Walrus often stands up for environmental causes. It has even run a number of articles openly condemning oil companies’ actions, such as “Pipeline Offence,” by Kyle Carsten Wyatt, in the January/February 2012 issue and “Ship Spotting,” by Claudia Goodine, in the July/August 2012 issue. Yet, The Walrus needs deep-pocket advertisers like Enbridge to support its magazine, and Enbridge needs popular magazines like The Walrus to reach the public. So what’s so bad about the two helping each other? That’s where editors and readers disagree.

Ezra Winton is a PhD student in communication studies and one of the creators behind the cultural and political projects Art Threat and Cinema Politica. In 2010 he wrote an outraged letter to The Walrus, and then an article on Art Threat regarding another set of controversial advertisements for the Canadian Association of Petroleum Producers.  He cancelled his subscription and suggested others do the same to protest the “greenwashing” he felt The Walrus was engaging in.

Winton isn’t alone in viewing The Walrus as a magazine that sticks it to the Power, shines a light in the dark spaces of society, pursues worthy and underrepresented subjects, and exposes oppression. However, this image isn’t reflected in the magazine’s mandate—its main goal is to produce good writing—but that doesn’t stop readers who, like Winton, feel deceived. “Those values that they’ve communicated through their writing in their magazine are reflected through their readership, so readers are drawn to the magazine because of those values,” Winton says. “So when they allow a dirty industry like the petroleum industry to lie and greenwash in their pages, there’s a corruption of those values.”

Rebecca Granovsky-Larsen, the editor of Briarpatch magazine (an independent bi-monthly that dubs itself an “irreverent alternative to the false consensus of the corporate media”) up until last December says that perhaps there are other ways to get funding without compromising a magazine’s morals. “I’m not going to say that it wouldn’t affect your bottom line,” she says. “But at the same time it’s going to affect your reputation if you’re running propaganda.” She suggests funding from groups such as labour unions or the Canadian Federation of Students. Granovsky-Larsen understands and appreciates that The Walrus is trying to be a real competitor to mainstream media, but thinks there are other ways to go about it. “I just think overall we need to get more creative with the way we go at funding and I don’t think the only solution is to ally ourselves with corporate interests.”

Harrowsmith Country Life magazine had a similar dilemma in the late ’70s. James Lawrence created Harrowsmith in 1976 to “serve as the first point of national communication for Canadian thought on alternatives to bigness and urban living.” The offices were located in Camden East, Ontario, a town of only 157 people at the time, and the magazine featured articles about rural living and back-to-the-land values. When an issue of Harrowsmith included a car ad, readers deluged Lawrence with angry letters, similar to the ones sent to Macfarlane. Lawrence decided that the right decision was to stand behind the magazine and the readers’ values and created a list of advertising guidelines that included rules like no cigarette ads, no liquor ads, and no advertising that is in bad taste. The  advantage of Lawrence’s decision was that readers felt connected to the magazine and  thought that it reflected their beliefs. The disadvantage was that being picky about advertisers meant that there weren’t always enough ads to support the growing magazine;Harrowsmith perpetually teetered on the edge of folding. It’s a dilemma not so different from the one The Walrus struggles with today.

Macfarlane answered his readers differently  than Lawrence. In his September 2012 editor’s note, he responded to the readers’ complaints by saying that “the magazine does not, as people sometimes suppose, choose its advertisers any more than it chooses its readers. It attracts the advertisers it attracts and it may not believe in what they’re selling, just as its advertisers may not agree with the published views of its editors and writers. Editors and advertisers live, as it were, under the same roof, but they have separate bedrooms; at least, they’re supposed to.”

Seems reasonable. If the magazine wants to survive it can’t censor its advertisements and the advertisers have no say on what the writers can or can’t write. But the other side makes sense as well. Readers pay for a magazine that they feel connected to and believe reflects their values, so they feel betrayed when they see advertisements that tell them otherwise. It’s a question of ethics, morals, and, unfortunately, money. A truly independent magazine such as Briarpatch has a circulation of only 2,600 while The Walrus’s is around 60,000. If The Walrus wants to continue to survive it needs to sell what the editorial team calls ad space and what some readers call its soul.

Putting faith in hate: When is religion the source or subject of hate speech?

Richard Moon, a law professor at the University of Windsor, came to Ryerson University on Monday, November 23, to speak...

After years of unrestrained infighting and ethical atrophy, will Ottawa’s press gallery have to answer to Parliament?