Legend has it that after his last broadcast for the CBC in 1976, Norman DePoe took a swing at his boss, Mike Daigneault, in the hallway outside the Montreal studio. Daigneault says this is “just not true,” that it was merely an argument between the two. DePoe also denied the incident, saying that it was only an “acrimonious dispute” between himself and the “young whippersnapper.” But many of his colleagues would love to believe that DePoe went down swinging. It would be just like him.

DePoe was a broadcast reporter whose feisty style on and off camera no longer fit the CBC. The management was changing; young men who had not paid their dues were now in charge and, as far as DePoe was concerned, were ruining the network. And DePoe could never be told what to do by someone he didn’t respect. After all, he had done more for broadcasting in the last 29 years than those whippersnappers would ever dream of.

In the eyes of many, DePoe was the greatest broadcast journalist Canada has ever known. He made more than 5,000 reports for the CBC. He covered 31 elections, the 1964 Washington Freedom March, Winston Churchill’s funeral in 1965, Canada’s centennial and the Quebec Crisis. He was the first full-time CBC staff correspondent on Parliament Hill. He won the 1976 Alex Award for outstanding contribution to communications in Canada and was a unanimous choice for the Canadian News Hall of Fame in 1985.

“He was the best newsman-broadcaster Canada has ever had,” says former colleague Bruce Phillips, now the director of communications for Brian Mulroney. “He had no equal. He was to Canadian broadcasting what Edward R. Murrow was to American broadcasting.”

But DePoe’s legend is based as much on his character as his achievements. He was a star in an era before celebrity journalism. When he died on March 13, 1980, of heart failure, more than 500 people attended his funeral. He once said he wanted his epitaph to read: “He was a good reporter.”

DePoe cultivated the image of the rogue reporter. His suit was always rumpled, his black hair slicked back in ripples, his eyes lined with fatigue, his moustache thin and neatly trimmed, and there was the ever present cigarette. He had a small scar on his left cheek, an injury from World War II-some say it twitched when he got angry. Even if it didn’t, people would like to believe it did. And, of course, there was the voice: a low, deep sound filtered through a throat that seemed lined with sandpaper. Dennis Braithwaite once wrote in The Globe and Mail that DePoe “had the smell of news on him.” A CBC colleague later dropped a note to DePoe that read: “Since when did the news smell like gin.”

The peak of DePoe’s career was his days as the CBC’s correspondent on Parliament Hill. It was also during these years-from 1960 to 1968-that he began drinking heavily. DePoe called it his self-inflicted wound, a wound that eventually contributed to his death. After the afternoon parliamentary session, newsmen would go to the press gallery and write their stories, but ~ with a twist-make that a gin with a :> lemon twist. While reporters banged away at their typewriters, they were served drinks by George the steward and a machine that dispensed beer at the drop of a quarter. Tom Leach, who worked with DePoe at the CBC’s Ottawa bureau, recalls: “DePoe would be at his typewriter and then would suddenly yell something like, ‘Geeoorrge! Bring me a double gin with a lemon twist!’ He would drink while he was writing, but so did everybody else. It was an era where it was an acceptable thing to do..”

To read the rest of this story, please see our ebook anthology: RRJ in Review: 30 Years of Watching the Watchdogs.
It can be purchased online here. 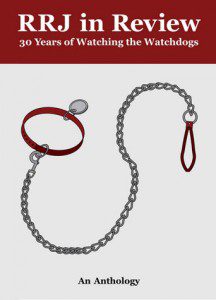 Peter Hendra was a Reports Editor for the Spring 1988 issue of the Ryerson Review of Journalism.

Peter Hendra was a Reports Editor for the Spring 1988 issue of the Ryerson Review of Journalism.

We’re looking at the wrong numbers

A StatsCan report released on February 15, 2016 shows how different age groups in Canada consume news and current affairs, and...

Rumours that 2010 will be the year of the tablet already have me steeled for the next technological wave to...