Overwhelmed by information? Buried by media? The RRJ is here to help with a new daily section designed to keep you up with the latest and greatest journalism, across all mediums.

Mark your calendars. Our friends at DigitalJournal.com recently announced the date of their next conference — April 6, 2011 at the Drake Hotel Underground. The Future of Media is a series of panel discussions about how current trends, technologies and innovations in social media affect us. It’s held in Toronto twice every year, usually in September and April. 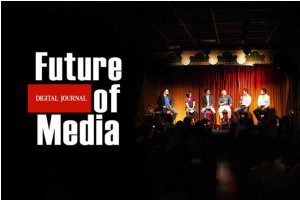 The Future of Media is one of the only events in which you’ll see a diverse group of media moguls gathered together in one room arguing and talking about the changing media landscape. Sometimes they agree, sometimes they don’t. From the role of mobile devices to digital media revenue, it’ll all be covered. Expect the panellists to also discuss how social media will have an impact on reporting about the current political protests in the Middle East and Africa, and how new apps and technologies are changing news organizations’ approach to media.

The panel discussion usually lasts about an hour and a half. After that the event features an interactive Q&A session with people on Facebook, Twitter and the live audience. Previous speakers have been the likes of Facebook Canada’s Elmer Sotto and Tim Shore of blogTO notoriety. This year’s panellists will be:

Even though admission is free, you need a ticket to get in, and it’s usually standing room only. According to their Twitter feed, tickets sold out pretty quickly (this year, within four hours!). But fear not—you can be put on their waiting list by emailing futureofmedia@digitaljournal.com

If you end up missing this year’s event, DigitalJournal.com will include a written recap and even YouTube videos of the panel discussion. Here’s a video from last year’s The Future of Media.

Much ado about Precious Little

At the end of the 20th century, a promising new phenomenon appeared—amateur reporters and commentators who came to be known...

Graffiti Alley is one of Matthew Blackett’s favourite places in Toronto. Tucked behind a kilometre-long stretch of one of the...