The Pope of CBC

Senior personnel say manager of special events and elections David Knapp is one of their key journalists. Yet, as he celebrates his fortieth year at the Corp, he's virtually unknown outside public broadcaster circles 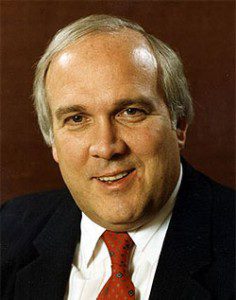 As CBC manager of special events and elections, Knapp worked directly with the Pope in September 1984. He says the eight-province, twelve-day Papal visit was the most challenging production he’d ever undertaken and he had to start the planning in fall 1983. “I lived that project for a year,” he says.

Knapp oversaw and co-ordinated a crew of two thousand. There were no cell phones in those days, so he used a marine radio as a portable communications system to facilitate keeping the event on track. The radio came in a briefcase and “weighed a ton.”

The setup for the event included 300 cameras, 370 positions and fifty-four television mobiles. “There are just so many little details,” says Mark Bulgutch, executive producer of CBC News and CBC Newsworld. “The dressing rooms, the size of the podium, the timetable of what time people should arrive, the media pens, the photo opportunities we’re going to give people – he knows these things.”

In all, 120 hours of live television were filmed. The event was a moving target, so it was difficult to anticipate every circumstance. “When the Pope would go for his walkabout,” Knapp says, “you’d never know where he’d end up.”

The Pope returned to Canada for World Youth Day in 2002. Father Thomas Rosica, then national director and chief executive officer of World Youth Day, now CEO of Salt + Light Media Foundation, co-ordinated coverage with Knapp. Rosica says the Vatican mentioned repeatedly over the years that, out of 104 international visits by John Paul II, the CBC’s handling of the 1984 Papal tour was one of the best. The Pope’s handlers trusted Knapp enough to allow his crew full access the second time around.

Papal visits require that extra level of co-ordination, but Knapp has managed a variety of large-scale productions. He has planned all the royal tours to Canada covered by CBC since the 1960s. He covered Charles de Gaulle’s 1967 visit to Quebec when the former French president said, infamously, “Vive le Quebec libre!” He covered Expo 67 in Montreal and Expo 86 in Vancouver. He covered the Queen signing the repatriation of the Canadian Constitution on Parliament Hill in 1982. He covered former Prime Minister Pierre Trudeau’s funeral in 2000. He has covered the annual anniversaries of VE-Day celebrations. The list goes on and in most cases, he wasn’t simply covering these events, he was organizing the overall broadcasting.

This year, the 62-year-old Knapp celebrates his fortieth anniversary at the public broadcaster. CBC ombudsman Vince Carlin calls him the most important unknown journalist in Canada. Richard Stursberg, executive vice-president of CBC Television, calls his work “crucial to our efforts as a leading news organization.” And Peter Mansbridge, anchor of The National, says, “If Dave didn’t do what he does well, those of us on air would never have the tools to do what we do.”

Knapp was born and raised in Montreal. He first became interested in journalism while still in high school, where he participated in Junior Achievement, a co-op program that gives students hands-on experience in a professional environment. One of the participating businesses was the now-defunct radio station CFOX in Pointe-Claire, Quebec. As an intern there, Knapp learned about journalism and the radio business. He began working professionally at CFOX in 1961 as a reporter and later as an assignment editor. He then moved to CBC as a city hall reporter in 1966 and became executive producer of CBC News in Quebec by 1970. In 1978, he was posted briefly in Ottawa, where he headed the parliamentary news bureau. A year later, he was transferred to Toronto and promoted to the role of executive producer of CBC special events and elections. By the time of the 1981 economic summit in Ottawa, he was director of broadcast operations. And by the mid-1980s, he was managing all CBC news special events.

The Pope’s 1984 visit was a career highlight, but there have been many others, including leadership conventions, royal tours and general elections. Planning all of them has been logistically tricky, he says, “like putting together a jigsaw puzzle.”

Right now, Knapp is setting up coverage of the April 4 opening of Parliament and throne speech. He says it will be a three-day, fifteen-camera event. It will take one and a half days to set up in Ottawa, and a half day to tear down. He’ll arrange the installation and optimal placement of cameras. He’ll balance the lighting in the building, which involves placing “gels” on the windows to block out excessive sunlight. He’ll make sure all the equipment cables work. And he’ll meet his new contacts in Stephen Harper’s Conservative government.

CBC also covers all provincial and territorial elections but only Ontario and British Columbia have fixed election dates. This means, Knapp says, that in many cases “we’re flying by the seat of our pants.” A few years ago, there were elections in both Ontario and New Brunswick held within forty-eight hours. “It makes life rather difficult.”

Decisions are made quickly. During the 2006 general election in January, Knapp had to find a suitable venue to hold the first leaders’ debate in Vancouver on just six days’ notice. He had to find one with enough room for the debate area, the media centre, the scrum area, the spinners’ area (each party has two spinners who talk to the press after the debates) and the dressing rooms. He had to make sure all the necessary equipment was on-site and ready to go. And he had to co-ordinate all security issues with the RCMP.

According to Canadian Press, Knapp was still at it with ten minutes to go before the party leaders took their places. Apparently, Conservative and Liberal aides started bickering about the lack of space for water and notes on the podiums. “There are no lips (on the podiums) or trays,” Knapp, who wasn’t having any of it, reportedly said. “We agreed to this two days ago.”

Despite all the routinely meticulous planning, strange things can happen. During World Youth Day in 2002, for example, CBC had twenty-eight cameras in place at Downsview Park in Toronto. Then, the night before the mass, a huge thunderstorm turned the park into a mud bowl. The next day, the resulting humidity caused five camera lenses to fog up. None of the crew could get at the lenses to change them because spectators who had erected makeshift shelters to keep themselves out of the mud blocked the roadways. “We ended up using the fogged cameras,” Knapp says, “and getting a different perspective of the event – kind of like a halo effect.”

There seems to be a kind of halo effect around Knapp as well. While his lengthy career has put him close to many important Canadians and world leaders, he’s remained virtually anonymous outside the CBC. Looking back, he says he feels privileged to have been involved in so many history-making experiences.

“When you start listing them all,” he says with a faint smile, “it’s been a pretty rewarding time.”

Mike Riley was the Director of Publicity for the Summer 2006 issue of the Ryerson Review of Journalism.

Mike Riley was the Director of Publicity for the Summer 2006 issue of the Ryerson Review of Journalism.

Reporting public opinion polls is a firmly entrenched element of election campaign coverage. But whether polls influence election results is...

Denver television station KBDI is launching a non-profit investigative news unit due to the reduction of significant investigative journalism. The...