When it comes to professional sport, the game has changed a lot—but so has the reporting

As the Toronto Blue Jays start their 2006 baseball season, many sportswriters say the team will be a serious contender. For the first time in thirteen years – since Toronto last won the World Series – fans might have something to get excited about.

“Touch ’em all, Joe [Carter],” said radio voice of the Jays Tom Cheek of the championship-winning play all those years ago. “You’ll never hit a bigger home run in your life.”

But as the Jays get ready to challenge for a title again, the announcer won’t be giving the play by play for us radio listeners. Cheek, who called over 4,300 consecutive games since opening day in 1977, died of cancer at age 66 in October 2005. 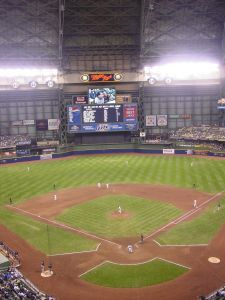 The last twelve months have been tumultuous for those who take solace in an older generation of sportswriters and broadcasters. Scott Young, 87, known to most adults as aGlobe and Mail columnist and to children as the author ofScrubs on Skates, died in June. Jim (Shaky) Hunt, 79, long-time broadcaster and columnist for the Toronto Sun, died of a heart attack in March. A few are still around – Trent Frayne, 87; Milt Dunnell, 100; and George (Baron) Gross, 83 – but bylines like Jim Coleman or Dick Beddoes have long been put to rest.

Their primes were long before the days of twenty-four-hour sports television and instant online scores and stats. There were so few media outlets outside the major dailies and radio that those who worked the stadiums and arenas of the city became voices unto themselves in Toronto sports. More importantly, their relationships with the teams they covered reflected that older, different world – one where loyalty to a team counted for something.

“[Cheek] had two families,” said his broadcast partner Jerry Howarth in a Globe article the day after his death. “He had his wife, Shirley, their three children and seven grandchildren and the other family was the Blue Jays.”

Another article featured reactions from close friends and associates – including Jays executives old and new. “For more than twenty-five years, Tom was not only my radio link to the Blue Jays, he was a loyal friend and colleague,” said former general manager Gord Ash. In 2004, Cheek was inducted into the Jays’ Level of Excellence – banners above the right-field stands of the Rogers Centre honouring the club’s greatest players.

George Gross, 83, corporate sports editor at the Sun, remembers the late 1960s through the blue-tinted lens of a reporter on the Toronto Maple Leafs beat. There were only four people covering the team then: Gross, then with the now-defunct Toronto Telegram; Red Burnett of the Toronto Star, Rex MacLeod of the Globe; and Foster Hewitt of Hockey Night in Canada (who posthumously had a broadcast booth named after him in the Air Canada Centre).

This who’s who crew of Toronto sports scribes actually paid its own way from arena to arena. In those days, payment meant a spot on the team flight with Tim Horton and company. “We had real access to those guys,” Gross says. Compare that to the scrums on TSN or Sportsnet, where Mats Sundin speaks to a wall of microphones, the same sound byte for all, before slinking back to the dressing room.

At the head of the ’60s Leafs was coach Punch Imlach. Aside from being the architect of the team’s last four Stanley Cups, Imlach was also known for his kindness to the journalists and broadcasters who chronicled his every action. It was partly due to his acknowledging the positions of power sportswriters held in the city, but it was kindness nonetheless.

“We knew he had to do a job, but at the same time, Punch Imlach knew that we had to do a job,” Gross says. “We couldn’t prostitute ourselves. If the team played lousy, we said it.” When a poor line change against the Boston Bruins one game cost the Leafs a goal and the win, Gross spelled it out in a Telyheadline the next morning: “Imlach blows last night’s hockey game.”

At team practice, Gross says, Imlach would approach him and say, “You didn’t have to be that rough on me.” But after a brief chat, Imlach would say, “‘Okay, I understand. Let’s have lunch.’ And that was it.”

To this day, Gross says his time on the Leafs beat thirty years ago allowed him a chance to develop the kind of access younger reporters wouldn’t have. “I can call several, well, most players, at midnight at home and they’ll still talk to me.”

Some journalists, like Young, took such a liking to Imlach that, when he was eventually fired by then owner Conn Smythe, Young was one of the first to show up at his front door – as a friend. Now? Don’t count on a Damien Cox or Bob McKenzie showing up at coach Pat Quinn’s door the day he’s fired.

“Today’s sportswriters are less protective of organization,” says Rick Matsumoto, a Star sportswriter who started out at the Tely. “We’re always hammering away at someone.”

He attributes the change in posturing to changes in ownership since the days of Imlach. “Harold Ballard [owner of the Leafs after Smythe] was an old curmudgeon,” Matsumoto remembers. “People viewed him sort of as a silly old man. You don’t have the same feeling toward Maple Leaf Sports and Entertainment,” whose majority owner now is the Ontario Teachers Pension Plan.

Along with that transition of sport into business was the rise of the multimillion-dollar player. Today they are younger, richer, “smartass, punky athletes,” says Matsumoto. In the old days, he says, “They were more like the guys who were writing about them. You could ride with them and play cards back then.”

Of course, it’s even tougher to ride with the boys when throngs of writers and broadcast teams all want to know why you blew it during the game. “There’s almost an antagonism today,” says Bill Stevenson, former sports host for CFRB radio. “The coach is afraid to say anything and the journalist can take the blame for that. I guess in those days, too, it wasn’t quite as competitive for the very simple reason there were no sports stations.”

Cliff Lee was the Visuals Editor for the Spring 2006 issue of the Ryerson Review of Journalism.

Cliff Lee was the Visuals Editor for the Spring 2006 issue of the Ryerson Review of Journalism.

Outside my Soviet-style apartment a rhythmic ghraavk-ghrrraaavk-ghravvvk fills the air: someone is shoveling snow. Inside, some Russian anchor, whose name...

That Was Then, This Is Now: Tabatha Southey

"That Was Then, This Is Now" explores the beginnings of some of Canada's favourite writers and journalists All Tabatha Southey...