When reporters sacrifice accuracy for readership and retweets, they deserve cold criticism

A retired Pennsylvania State University academic is “mad as hell” at journalists for getting the story so wrong during January’s record-breaking chilly temperatures. “The broadcasters and bloggers who introduced ‘polar vortex’ into the discussion of Arctic outbreaks this January made a giant, unscientific leap,” former lecturer and forecaster Lee Grenci wrote on a Penn State meteorology website. “I have a really tough time making a direct link between the polar vortex and Arctic air masses.”

The explanations that a displaced polar vortex caused the frigid blasts were just a bunch of hot air. In a January 10 blog post, Stu Ostro, The Weather Channel’s senior meteorologist, called the connection “tenuous at best.” Instead, “a slow jet stream” caused the super-cold air southwards, according to a New Scientist article. The widespread misuse of the term even inspired American Meteorological Society president and university professor J. Marshall Shepherd to start the #StopPolarVortexAbuse Twitter hashtag. 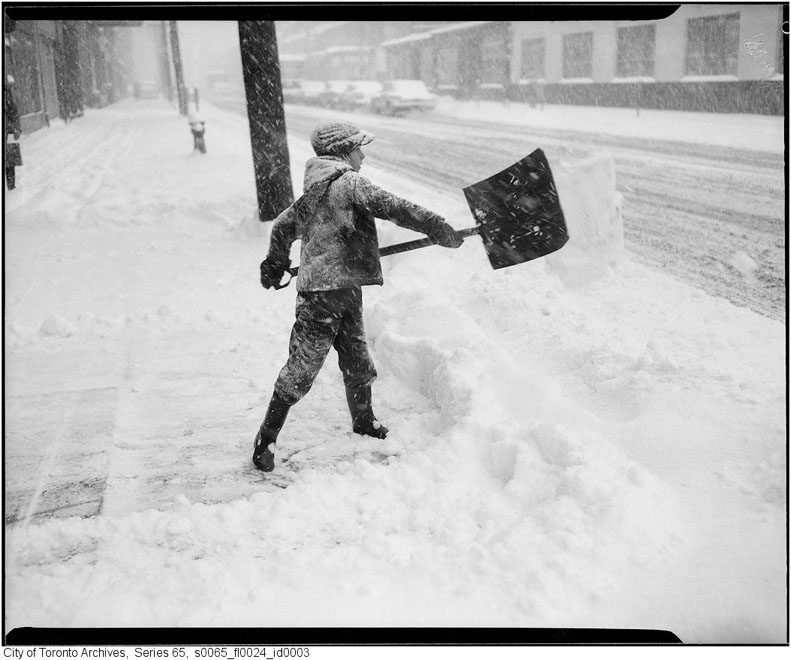 A boy shovels snow during a snowstorm in 1961 in Toronto (PHOTO: ALEXANDRA STUDIO/CITY OF TORONTO ARCHIVES)

After journalists simplified the science for catchy headlines and punchy tweets, “polar vortex” quickly became a colloquialism for freezing cold. It’s not the first time reporters have made the weather a joke: this phrase follows other viral winter weather terms such as “Snowmageddon” and “Snowpocalypse.” These unscientific terms are catching on more and more because nothing piques interest and boosts audience counts like freak weather events with ominous-sounding names.

Canadian news outlets including CBC, The Globe and Mail and the Toronto Sun covered the polar vortex—and its alleged return in late January—without mentioning the experts who didn’t think it was the reason behind the cold winter weather. It was even the inspiration for some facetious spin-off articles such as “The Polar Vortex music playlist,” in which QMI Agency writer John Williams asked, “Want to stick winter up someone’s polar vortex?” 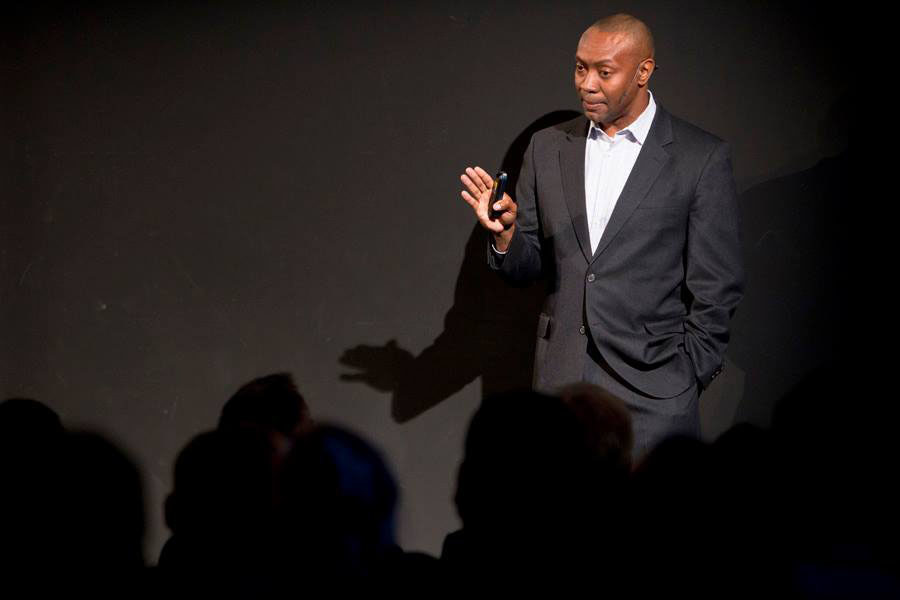 The president of the American Meteorological Society, Dr. J. Marshall Shepherd, seen here at a TEDx talk in Atlanta, Georgia, started the #StopPolarVortexAbuse hashtag on Twitter (PHOTO: COURTESY OF MARSHALL SHEPHERD AND TEDx)

Because “polar” means from around the Arctic or Antarctic and “vortex” often refers to whirling winds, the words could describe the cause of the frigid winds we experienced in early January. But as a scientific term, the phrase means something else entirely. Andrew Bell, the executive director of the Canadian Meteorological and Oceanographic Society, describes the polar vortex as a band of cold, fast-moving winds in the stratosphere that spins around the north and south poles in the winter and shows signs of ozone depletion in the spring. It’s not a cold front or a storm system; it takes place many kilometres above the streams and currents that affect the weather.

And no, Rush Limbaugh, the media didn’t create it last month to push some global warming agenda. In fact, “the great polar vortex,” referring to the wind’s circular motion at the earth’s poles, appeared in The Living Age journal in 1853. According to Bell, it was always positioned in the Arctic and didn’t blanket Canada or the U.S. He chalks up this year’s first stint of record-breaking temperatures to the position and movement of the jet stream. “Technical terms were misappropriated just to generate more interest in the news.”

It seems to have started on January 3 with the Associated Press story, “‘Polar vortex’ to blast frigid air over much of U.S.” Carson Walker wrote that one reason for the then upcoming “life threatening wind chills” and “historic cold outbreak” is “a ‘polar vortex,’ as one meteorologist calls it.” That meteorologist was Ryan Maue, who works for WeatherBell Analytics. Walker also quoted him saying, “If you’re under 40, you’ve not seen this stuff before.” (Not true; according to Ostro, there were also intense cold waves in 1996, 1994, 1985 and 1977.)

By the time National Post digital reporter Josh Visser wrote about the weather on January 6, “polar vortex” was all over the web. “I’m not much of a science writer,” he says. “I basically write about what’s already popular.” Working under a tight deadline and with the goal of increasing web traffic to his story, Visser took the popular term and rolled with it. “Any time you’re trying to explain something science-y to a general audience, you’re trying to make it as interesting as you can. You don’t really get a lot of landscape to get into the nitty-gritty of what terms mean.” 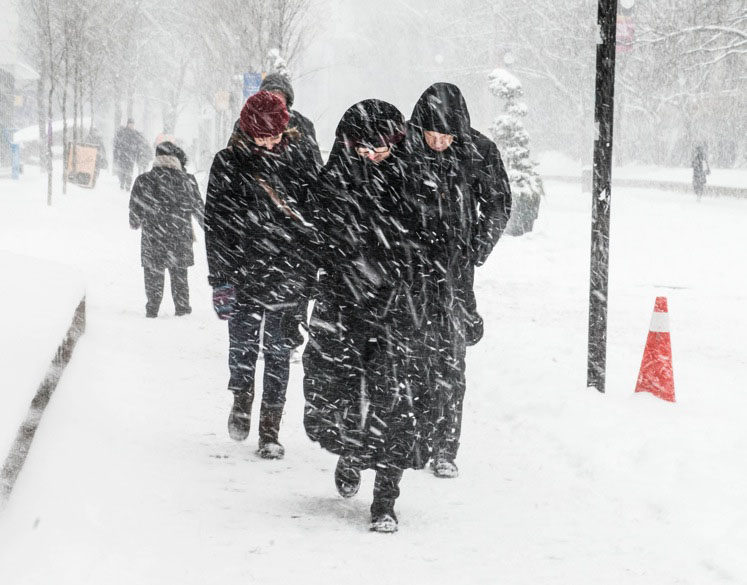 His priority was getting the practical side of the story—the weather’s effects on traffic, flights and so on. There simply wasn’t time to verify the hard science with a meteorologist or climatologist. While Visser acknowledges there was “a certain element of sensationalism” in recent extreme weather coverage, he says his contributions informed travellers about flight delays and cancellations. “Those stories were successful for us. They were very well read.”

The polar vortex scored ratings elsewhere, too. Advertising sales managers don’t deny the importance of weather reporting, particularly extreme weather. Rogers Media-owned 680 News, for example, runs an advertiser-sponsored Extreme Weather Centre from November to March every year. For about $80,000 each, this year’s advertisers—Redtag.ca, Subaru, CG&B Group and Spartan Fitness—get to be named when the centre is activated, and get 500 30-second commercial slots. The station sees a spike in listeners with bad weather. “Our ratings go through the roof,” says Sabrina Korva, 680 News’s account manager until mid-January when she moved to Astral. “Of course to keep our advertisers happy, we will look for any excuse to activate it.”

Environment Canada climatologist David Phillips isn’t condemning the latest weather catchphrase. He’s just happy more Canadians are talking about the weather. “I suppose there’s no harm in describing it as a polar vortex or a Siberian express or arctic pipeline or an arctic outflow,” he says. “If people pay attention to it, are interested in it, and it leads them to taking action for more safety, then I’m all for it.”

While climatologists aim to simplify the weather for a broad audience, even Phillips has his limits: “If somebody uses it like, ‘Well, Rob Ford is caught in a polar vortex,’ I’d object to that.”

In 2012, American photojournalist Ben Lowy made history. His photograph of waves from Hurricane Sandy breaking in New York City...