And They Throw Erasers Too, Just Like in Public Schools…

In the second of a two-part investigation into the coverage of religion during Ontario's recent election campaign, the Review examines how reporters dealt with a suddenly hot topic, the funding of faith-based schools. Turns out they learned a lot by just hanging out and observing the action at Christian, Jewish and Muslim schools 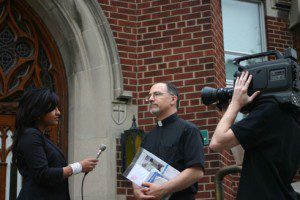 Reporting on religion can be difficult for journalists, especially when they don’t understand its complexities
(Photo by: Ana Maria De La Fuente)

When Daniel Girard stepped into the Leo Baeck Day School at Bathurst and Eglinton in Toronto, he wasn’t sure what to expect. Uniforms, probably. Reverence, maybe. He did notice yarmulkes adorned with the Maple Leafs logo andSimpsons characters, and shorts and T-shirts worn to Friday afternoon services in the Holy Blossom Temple next to the school. He also heard a profession of social and religious equality for women and homosexuals. But nothing in Girard’s own secular public education prepared him for the mixture of the sacred and the mundane he saw at the reform, small-l liberal Jewish school. “I went to school out west. I was in the B.C. system, which is a public system,” he says, a little sheepishly. “I didn’t know what a ‘religious school’ was like.”

Girard, an education reporter for the Toronto Star, visited Leo Baeck in early September as part of a three-reporter, three-article project quarterbacked, as Girard puts it, by fellow Star education reporter Louise Brown. When asked about the genesis of the project, Brown is quick to dismiss her brainstorm. “Well, it’s not rocket science,” she says, chuckling. “We knew that faith-based funding would be a huge issue. Even in the summer, Brown says she saw op. ed. pieces starting to appear as the media buzz around the issue gathered steam. From there, the coverage snowballed: Columns. Polls. Panel discussions. Briefs from the campaign buses. Carefully staged news conferences.

But what Brown didn’t see was coverage from the schools themselves, even as kids and teachers started trooping back to class in September. Worse, says Brown, few people actually knew what everyday life was like in a religious school, including her. “I’ve covered schools on and off for almost 30 years for the Star, and Ialways cover public education.” When the faith-based funding issue surfaced, though, Brown realized her own knowledge as a reporter was lacking. “I was poorly equipped to write about this because I never stepped foot in a private, faith-based school.” Embarrassment aside, the opportunity to tell a story about something new and unknown to most readers, and to the reporters themselves, became something that was too good to pass up.

So Brown proposed a series of articles. She, Girard and third education reporter Kristin Rushowy would go to three schools around Toronto, representing a trinity of the three largest religious affiliations in the GTA: Christianity, Judaism and Islam. Brown got in touch with religious leaders from the communities, who in turn pointed her to three schools — Knox Christian School in Bowmanville, Leo Baeck Day School in Toronto and the Islamic Society of North America (ISNA) Elementary School in Mississauga — that would co-operate with her project.

The Star’s team’s willingness to put themselves at the centre of the action, so to speak, throws into relief a common problem in the coverage of religion by reporters whose beats may not regularly intersect with religious matters: ignorance. Ignorance about religious practices, ignorance about the finer points of religious doctrine and ignorance about the extent to which religious identity encompasses all elements of some people’s lives. Religion, in all its twining, tangled complexity, is simply outside many reporters’ realm of experience.

The roots of this lack of knowledge run deep. Lois Sweet, associate professor of journalism at Carleton University, is the author of God in the Classroom: The Controversial Issue of Religion in Canada’s Schools. Some of the difficulties in reporting on religion, she says, lie with the lack of awareness in society as a whole about the role of faith in people’s lives. She points out, “In a multicultural society it’s crazy that we don’t know enough about the practices and experiences of others and the extent to which religious faith informs their lives.” Journalists, she says, “have this fear about how we cover this without totally getting it wrong or

Stuart Laidlaw, faith and ethics reporter at the Star, agrees with Sweet. He says reporters need to be more willing to admit ignorance in order to get to the heart of their stories. “One reporter I talked to said, ‘I was never taken to church by my parents,’” he recalls. He says he told the reporter, “You just say, ‘I’m not that familiar with this type of church — can you explain it to me?’”

Laidlaw sees an unwillingness to cause offence as only one reason reporters have trouble covering religious issues. Among journalists — and, by extension, the public at large — there exists the fundamental notion that communities and people of faith are, well, fundamentalist. He says this belief causes reporters to put up mental walls between themselves and their story, often preventing them from getting to the heart of the issue because of fear, real or imagined. “And as soon as reporters put a wall between them and their stories,” he says, “they’re lost.”

Laidlaw would like to see more reporters break down these walls by “getting into the heads” of people who are religious. He’d also like to see more done “to try to understand why they see religion as an everyday aspect of their lives, and to do that from a number of different perspectives.”

For Brown, religious expression in a schoolwas an unfamiliar experience. She says that the extent to which the Knox Christian School curriculum had God all through it was the most surprising thing about her two days observing classes and chatting with students. The classes she attended, the students she talked with, even the e-newsletter she read on the school website were, as she wrote in a follow-up column in the Star, “infused with Christianity.”

Each of the reporters spent a few hours preparing for his or her visit to the school, chatting on the phone to administrators and perusing websites. But the ability to research as much or as little as necessary to cover a topic as staggeringly complex as religion is something that is often difficult for reporters under tight time constraints and immutable deadlines.

For Larry Cornies, this is the crux of the matter. Cornies holds the Maclean-Hunter chair of communication ethics at Ryerson University and is a news page editor at The Globe and Mail. He has long held interests in religion and media, serving as associate editor of The Mennonite from 1980-1984 and publishing a study on religion content in Ontario dailies in 1986. For him, religion coverage is not constrained so much by a fear of causing offence — “Reporters aren’t generally afraid of offending people,” he says, grinning — but by a lack of time to fully investigate the context and history surrounding religious issues. “What reporters are afraid of is looking stupid and betraying the fact they don’t know what the issues are.”

This lack of time is perhaps the reason that coverage of the issue in most media outlets hasn’t exactly been groundbreaking. Opinion columnists like Murray Campbell for the Globe and Christina Blizzard for theToronto Sun have weighed in. Polls of all sorts have been published. Reporters on election buses have dutifully filed their reports. According to Jennifer Mossop, former Liberal MPP for Hamilton East-Stoney Creek, election columnist for the Sun and former anchor and producer for CHCH television, political coverage doesn’t really change, no matter what the topic. She knows first-hand, now that she’s been on “the other side of the microphone,” how much gets missed when reporters are concentrating all their energies on grabbing a 20-second sound bite. “Reporters need a headline, and they have to have something that’s a little sexy to talk about.”

There’s nothing sexy at the ISNA Elementary School, unless you count a notebook carried by a hijab-clad girl that read “I (heart) High School Musical.” Rushowy spent two “very long” school days at the Islamic school and found, as she wrote in a follow-up column, “kids will be kids.” Although she noticed big differences from the public schools she usually covers — girls and boys in Grade 4 and up sit in separate areas in the classroom, students are called to prayer at 1:30 in the afternoon — she describes the general chaos common to all classrooms everywhere: students pitching erasers at each other when the teacher’s back is turned, and mayhem in a Grade 2 classroom when the teacher, Sister Sadia, leaves the room, complete with a student guard at the door to warn of her imminent return.

Reaction to the September 22-24 series was mixed, judging from the letters to the editor. Some people took issue with the word “segregated” that appeared in the headline for Rushowy’s story. One reader was skeptical that students could be taught religion for one-third of their day and still have time to follow the official Ontario curriculum. And according to Brown, one reader was pleased that “for once, the media aren’t making fun of Christians.

For Girard, the purpose of the articles was to inform. “We wanted to break down the myths of what these schools were like,” he says. “We wanted to go in, to tell people what it was like, and let them decide whether they were surprised.”

Brown has an even more philosophical take on the project. For her, reporting from the religious schools goes to the heart of the purpose of journalism in the first place: to inform citizens so that they can make responsible choices. “This is something that presumably will be informing people’s vote, and how can you make a responsible decision if you don’t even know what the schools are like?”

Sara Chappel was the Online Editor for the Spring 2008 issue of the Ryerson Review of Journalism.

Sara Chappel was the Online Editor for the Spring 2008 issue of the Ryerson Review of Journalism.

Patti Tasko calls it a "huge fight": Canadian Press (CP) versus the town of Lac La Biche, Alta. No blood...