Patti Tasko calls it a “huge fight”: Canadian Press (CP) versus the town of Lac La Biche, Alta. No blood was shed, no one was killed, and there were certainly no sex scandals. But calls came into CP, including one from the mayor, with people riled up about one thing: the spelling of the town’s name. 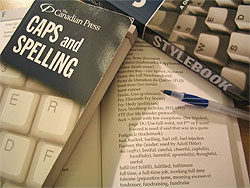 The dispute was over nothing more than the capitalization of “la” in Lac La Biche. “It was ridiculous,” she says. “I actually had someone drive down to Lac La Biche and tell me what was on the sign. A local newspaper claimed it was spelled one way and our people said, ‘I saw the sign going into town!'”

In her CP office in downtown Toronto, she pulls a 1998Stylebook from her shelf and points out “Lac la Biche.” She then flips open the 17th and most recent edition, and, sure enough, the second L is capitalized, having been changed in the previous edition. Shutting the book she says, “People can be quite fervent about this stuff.”

The proof of that statement has become self-evident. While some wouldn’t give a second thought to the spelling of John Smith in one paragraph, then John Smythe three paragraphs down, many editors are firm on their opinions about style. The rules of style are constantly changing – and sometimes broken – but the importance of establishing a basis for standards and clarity remains.

“Communication is so important; it’s part of business and lifestyle,” says Tasko. “The written word has become increasingly important in the last 20 years, and it’s important to do it correctly.”

Tasko didn’t always count herself among such fervent supporters of style. When she became the senior supervising editor of CP in 1993, one of her responsibilities was to become editor of the Stylebook. Though she admits it was the least attractive aspect, she’s grown to love the wackiness that comes with her job description.

“There are people who care passionately about style when most other people would think, ‘Who cares?'”

But people do care, as she has discovered over the years. Those who worry about writing have had rules instilled in them, and Tasko believes adhering to them can later develop into a passion. “It’s a tradition you want to maintain,” she says. “Scientists are just as precise about their world as we are about ours. People are rule conscious.”

Rules can also be misinterpreted. While “fuck” has appeared in the Stylebook, which instructs not to use “the prissy device of replacing some letters of the offensive words with hyphens,” the latest edition of The Canadian Press Caps and Spelling, released in the summer of 2005, included “fuck” for the first time. This prompted several phone calls from radio stations, believing obscenities were acceptable for everyday use because it was now in the book.

“It was misconstrued!” Tasko insists. “I will even read to you what it says in here!” Then, opening her copy, she shows that beside “fuck” reads “avoid with few exceptions.”

“I saw journalists using ‘f-word,’ and I said, ‘Why are we doing this? It’s a common vulgarity,'” reasons Tasko. “It just needed guidance and that’s why I finally put it in.”

But making updates is about more than just reacting to flack. Caps and Spelling is released every other year, but updating the Stylebook is more complicated. Former CP Stylebook editor Peter Buckley calls it “a long, picky, careful process.” Tasko will often consult with two others to complete the triumvirate of experts: Katherine Barber, editor-in-chief of the Canadian Oxford Dictionary, and Warren Clements, editor of The Globe and Mail Style Book. (That’s “style book.” Two words.)

CP looks at style’s usage in society and changes it accordingly. Language, says Tasko, is intuitive, so she issues rulings that are natural. The Internet in particular, she says, has helped to make language more casual.

A word such as “e-mail” has gradually evolved from its original usage, although there were different opinions. “It was eventually going to change that way, with a dropped hyphen,” says Katherine Barber. “Language moves toward what is most efficient. Why type the extra keystroke for the hyphen if it’s not necessary and everyone understands the word without it?”

Clements, however, preferred that keystroke for the sake of consistency. “There are so many other applications of the ‘e-‘ format,” he defends. “It would look odd to drop the ‘e-‘ just for e-mail and not for other words, like ‘e-business’ or ‘e-commerce.'”

Tasko also sided with Clements. “I’m not sure why I did. It’s probably wrong,” she says, laughing. “But I just wasn’t quite ready to go there. I was going by what I saw.”

Most decisions are made according to usage – within reason. “People have their own little quirks, and if you actually indulged people’s quirks, you’d have style that would be impossible to maintain,” adds Tasko.

The first Stylebook appeared in 1940 when CP was recognized as a suitable organization through which to make style rulings. While CP does not keep a record of its users, more than 5,000 copies of the Stylebookand Caps and Spelling each are sold annually, not just to journalists, but also various businesses, non-profit organizations and the government, to name a few. It has become more than a journalism manual and is now a general tool for all communicators.

“It’s a mammoth project to create a style from scratch, so we provide the expertise and do the legwork instead. Our marketing people call it ‘the bible,'” says Tasko, before quickly clarifying herself. “That’s ‘bible,’ lowercase B!”

For Bill Walsh, a copy chief at The Washington Post in the U.S. and author of Lapsing Into a Comma andThe Elephants of Style, it’s important to differentiate between style, grammar, syntax, spelling and other matters of correct usage.

“There are some very smart people who believe that usage is what it is,” he writes in an email interview. “As far as I know, no English-speaking country has an official board handing out decrees on what’s right and wrong. It all comes down to finding a consensus on what doesn’t look or sound stupid – at least for now.”

Back in the 1940s, CP was popular for banning words. Tasko says she reads earlier editions of theStylebook when she needs a laugh. Running her finger along a list of banned words in 1947, she reads aloud: “finalize,” “quite” and “motivated” – words found in today’s dictionary.

People frequently ask her to ban words, she says, “but words haven’t been banned in about 40 years. You do get weirdly controversial issues where you only think there’s one right answer, but sometimes there are just no obvious answers and you have to decide, ‘This is how we’re doing it.'”

One controversial issue involved “Nfld.,” the abbreviation of Newfoundland and Labrador. Before the province’s name was officially changed to “N.L.” in 2001, Tasko received weekly emails from Labradorians who were upset that CP’s style dictated using the placeline “Nfld.” even if a story took place in Labrador.

But Tasko purposely waited until late 2005 to change the placeline. “With style, you hate to be changing it. Any decision I’ve made quickly, because I didn’t see where it was going, I’ve often needed to overrule it later because usage has gone a different way.”

When a change is necessary, Tasko reaches for the Stylebook to check for rules, and then decides whether or not the rule still works. If so, she applies it; if not, she creates an exception, although exceptions are kept to a minimum. From there, Tasko tracks down common usages of the word, also consulting AP style, ensuring it’s not offensive or unclear. “Then it goes into the book,” she says. “Then sometimes it comes out of the book later,” especially if there’s an error. “The last thing you want in a style book is a typo,” says Peter Buckley. “You have to make sure nothing is dropped.”

Or perhaps, in Tasko’s case, added. She reluctantly points out a page near the back of the latest Caps and Spelling edition, on which a large pen mark circles the word “transalation.”

“That’s so embarrassing!” she exclaims, burying her head in her hands. “That’s definitely going to change in the next edition.”

[Text contains three clarifications to original article as published in the RRJ print edition:] When I started my journalism studies at...

Scaachi Koul talks about her upcoming feature "Supportnet" in the Summer 2012 issue of the Ryerson Review of Journalism.