Last year the Calgary Herald threw its readers a curveball called Swerve, aiming its Friday magazine insert at a demographic too old for alternative weeklies yet too young to stay inside all week. Now rival daily the Calgary Sun rotates the battle with an advertising department-driven product called Orb

Eleven copies of the March 3, 2006 issue of Calgary’s Swerve magazine are currently selling on eBay. At last check, the highest bid is just over $36. That’s pretty good considering Swerve is a freebie magazine tucked inside the city’s main daily newspaper, the Calgary Herald, every Friday.

The March 3 edition holds great appeal to fans of the hit film Brokeback Mountain, and they’ve turned the issue into something of a collector’s item. Swerve‘s story provided details about scenes from the film that were shot on location in southern Alberta, accompanied by stunning landscape photographs.

The year-and-a-half old Swerve is a testament to Calgary’s growth as a city and the need for area newspapers to adapt to a changing market. The weekly insert has been well-received – so much so that, in the tradition of imitation being the sincerest form of flattery, the CanWest Global Communications Corp.?owned Herald‘s rival, the Sun Media?owned Calgary Sun, has created its own lifestyle insert, a new monthly called Orb Magazine. 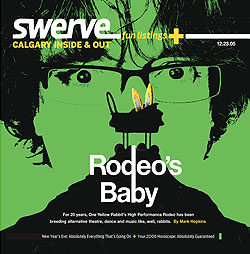 Swerve was the brainchild of former Herald editor-in-chief Malcolm Kirk and executive Herald staff, and was introduced in November 2004. Looking to spice things up for Herald readers with a listings-heavy magazine, Kirk hired Calgary native Shelley Youngblut to create the prototype. Youngblut, a veteran writer and editor, had already helped launch or redesign a number of Canadian and American magazines. She was part of the original team that launched ESPN: The Magazine for Disney. She also redesigned ESPN: Hockey ’96 , was deputy editor for the launch of MTV/Nickelodeon’s Nick. Jr. magazine, redesigned and edited a special issue of Cosmopolitan, redesigned the front-of-book section for Western Living and helped launch two of The Globe and Mail‘s now-defunct magazines, West and Toronto.

Named editor-in-chief of Swerve upon launch, Youngblut says she was aiming to create a publication for “smart, funny people” in the city. “We wanted to intrigue new readers and those who thought of the Herald as their father’s newspaper.”

Originally Kirk had planned to create something more like Fast Forward, Calgary’s reigning alternative weekly, but Youngblut didn’t see a need to repeat that formula. Instead, she leaned in the direction of a service-heavy magazine, accompanied by one feature and a few smaller articles per issue. “There’s something to do in Calgary every night, ten things to do every night, and I thought, ‘Well that’s fine, but let’s make it even bigger,'” she said in an interview with Calgary radio station CKUA. She tries regularly to tap into the idea that what’s new in culture doesn’t necessarily equate to what’s good. “We’re not a flavour-of-the-week magazine and we’re not tied up in what’s timely,” she says. “To put it simply, the name Lindsay Lohan has never appeared in Swerve – and never will.”

Swerve looks at culture in a way that mainstream media often ignores, but not with the kind of alternative-weekly feel that would limit its demographic either. When everyone in Calgary was covering Canada’s performance in figure skating at the recent Olympics in Turin, Swerve instead looked inward with the March 17, 2006 cover story, “Why Amanda Can’t Skate.” It focused on Calgary’s Amanda Billings, who had been expected to compete but whose injury forced her off the ice in December. The article used Billings’s story to explain the world of competitive skating and the toll it takes on competitive skaters. “It’s about finding an emotional point of entry and telling the story through that,” Youngblut says. And, “While everyone else was covering one thing, we thought, ‘Why don’t we cover the very best that we have right here?'”

In an August cover story, Swerve took a fun angle with the story, “The Underachieving Gardener: Seven Overcomeable Garden Sins.” The lede, written with a sass characteristic of Swerve, set the tone. “They say the first step toward healing is admitting you have a problem – and that’s not an easy thing to do,” it read. “So, we here at Swerve will stand up first. I, Jacquie, am an underachieving gardener.”

Swerve is doing well with readers both young and old. Youngblut attributes this in part to the smart writing and the service of local Calgary listings, photography and content. “There’s a wink in Swerve, but it’s a very inclusive wink,” she says. “We see the best in you. If you get the joke, good. If not, turn the page.”

Although putting out a weekly magazine is a calculated risk, Herald publisher Peter Menzies says he understands the importance of keeping in touch with the community. “We live in an age of rapid social change and in which media must be continually reassessing what they do and how they do it,” he says. “The one thing that is always wrong is to do nothing.”

Swerve is housed within the Herald building, yet it is separate from its parent. Rather than hiring six full-time staff from within its own ranks, “The Herald allowed magazine people to create a magazine,” Youngblut says. This independence extends to editorial as well. “Half the time they don’t even know what we’re doing until Swerve comes out,” she says, laughing. “It’s because they trust me,” she says, adding, “it’s a trust I don’t want to abuse.”

This level of trust allows Swerve to engage readers in ways the newspaper can’t, but Youngblut points out that it doesn’t amount to complete autonomy. One week Swerve ran with a racy theme its editors dubbed “The Naked Issue.” The main story featured the word “penis” so many times that senior Herald staff became concerned. To settle nerves, Youngblut thought it might be funny to place a black bar over the word every time it appeared, and they ran a contest asking readers to email them the missing word. “We came to work and our in-boxes were overflowing with the word ‘penis,'” she says.

According to internal research done for the Herald by Cameron Strategy, Swerve has become one of the most-read sections in the paper. Since 2003, weekday Herald readership has increased by 32,000, according to NADbank statistics, with a 2.1 per cent increase in the Herald‘s Friday paid circulation between 2004 and 2005.

Over at the Calgary Sun, the numbers aren’t quite so rosy. Weekday readership has gone down by over 26,000 since 2003, and Sunday readership has decreased by 9,300. But Shawn Cornell, manager of theSun‘s new monthly, Orb, is quick to say the magazine wasn’t created as a counter to Swerve. “It’s not the same thing at all,” he says, citing reasons such as its monthly frequency and its more general lifestyle coverage. He also mentions the difference in look – Orb is a full-colour, glossy, regular-sized magazine.Swerve, on the other hand, looks more like The Canadian and Weekend magazines, the old rotogravures that were published by The Toronto Star and the Globe until the 1980s.

And with sections such as Jet (travel), Coin (finance), Spin (events around town), Space (home decor and urban planning) and Threadz (fashion), Orb brings offers a hodgepodge of information its creators hope will interest average Calgarians. Explaining that everything else on the market is either too low- or high-brow, Cornell says Orb targets a middle-of-the-road, 30- to 49-year-old demographic. “Maybe they can’t necessarily afford a Mercedes,” Cornell says of the Orb reader, “but there are other nice cars out there.”

Ryan Popowich, Orb‘s creative director, feels there’s a gap in the market. “It’s the ‘what’s cool’ magazine for everyday, ordinary people,” he says. Orb‘s April feature divides wine culture into reader-friendly categories such as “How to Fake Being a Wine Snob” and “Learning the Basics of Wine-Making.” Popowich says other local magazines, such as Avenue, aim for a cosmopolitan attitude that doesn’t always work with the local mindset. “Calgary is a booming, dynamic city that can be considered in a league with larger urban centres like Toronto and Vancouver,” he says. “However, we are different.”

The Sun already publishes several small-scale magazines, such as the monthly Urbane that is geared toward 18- to 35-year-olds, the quarterly Sun Country about western living and Wag for pet owners. It also produces dozens of single-issue destination magazines about Calgary and various industry-specific, single-issue magazines. But none is close in scope to Orb.

Introduced two months ago, Orb is an advertising department project, with the magazine’s main staff also directly employed by the Sun. Manager Cornell is the Sun‘s national ad manager, Popowich is the Sun‘s product development supervisor and special projects editor, and Orb associate editor Kristen Enevold is theSun‘s product development coordinator and a senior writer. “It’s a really neat time to start a magazine in the city,” says Enevold, “the only point I can ever remember the city changing.”

Advertisers have already noticed the new magazine, says Sun publisher Guy Huntingford. Sixty per cent of the ads appearing in the magazine so far have had no previous bookings in the Sun, which proves to him that adding magazines like Orb to the newspaper mix makes good business sense. “Readers start looking for free reads over time,” he says. The new monthly’s track record is also being watched closely by Sun Media executives, according to Huntingford. “Orb was a Calgary initiative, and national advertisers are watching,” he says. If it proves successful, similar models will be implemented at other Sun Media papers.

Youngblut isn’t terribly worried about the latest entry in the market. “Any competition keeps you sharp,” she says. Besides, the fit between Swerve and the Herald is portable, she says, with the model capable of being rolled out anywhere. “There’s a place for Swerve in every CanWest paper in the country,” she believes. “You take the template and then you put it in your own voice.”

Now is an excellent time to experiment in Calgary. With the new oil boom heating the economy, there has been impressive population spurt since the turn of the decade. By the end of 2006, Calgary’s economic region will show an increase of 145,000 people in the last half decade.

The Sun‘s Huntingford agrees that the changing face of Calgary has played a crucial role in the development of Orb, which is trying to capture the attention of this new influx of young families. “We felt there was opportunity for something like this,” he says.

“The challenge for us,” says the Herald‘s Menzies, “is balancing how we serve our readership base between what is simplistically but accurately described as the old and the new Calgary.”

Here, journalist and author Patricia Pearson provides insight into the current climate for this type of writing. Will books stifle...