Campus clampdown: student governments bully the papers that cover them 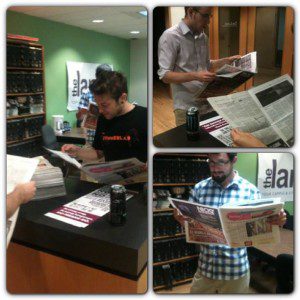 The Lance staff at work (PHOTO COURTESY OF SARAH HORWATH)

Last summer, Queen’s University’s The Journal ran a story on the renovation and rebranding of a money-losing campus pub. Two months later, the school’s student government pulled its ads—a large part of the paper’s revenue. The move was, according to co-editor-in-chief Alison Shouldice, “an extreme threat to the democracy of the student body on campus.”

It wasn’t the first time this has happened at a Canadian school. Earlier last year, University of Windsor’s The Lance ran a story about possible corruption in a student election. The school’s student union abruptly ordered the paper to shut down its print edition, though that decision was later overturned. And in 2010, The Opus, a paper out of Confederation College in Thunder Bay, Ontario, ran a cover story that jokingly asked its readers, “Is the Opus bigger than Jesus?” The Student Union of Confederation College Incorporated (SUCCI) was so unamused, it took control of the paper and drastically altered its format. An op-ed in Lakehead University’s The Argus called the now government-controlled paper a “mere newsletter for SUCCI, not existing as a service to students, but as a service to the union.” Within months, the Opuswas dead.

While guarantees of editorial autonomy—found in the bylaws and policy documents of student newspapers and governments—prevent campus politicians from directly interfering with editorial content, those politicians can exercise control through other means. These three instances aren’t the only examples of student unions trying to silence campus journalists, especially when the journalists publicize the unions’ sometimes-unflattering actions.

Across Canada, many student governments are pulling the purse strings of papers, either as major funders or the main advertisers. And as long as that’s the case, the independence of—and even survival of—campus publications will remain precarious.

Justin McElroy, a Vancouver-based journalist at Global News B.C., and alum of The Ubyssey, the University of British Columbia’s paper, says the power dynamic is untenable. “I always urge campus newspapers to find a way to become independent non-profits so they’re immune from this sort of bullying from their student union.”

Despite the obvious advantages, not all papers can pull off becoming truly financially independent. To understand why these publications stay under the thumbs of student governments, let’s start with the challenges.

Every year, if not every semester, campus papers can expect entirely new faces in the newsroom, from reporters to ad coordinators to editors. Who has time to fight for independence or restructure the business model while hunting down sources and keeping up with class assignments? “How can you make any kind of solid changes?” asks Sarah Horwath, editor-in-chief of the Lance. “It’s a constant revolving door.”

On top of the workload faced by their staff, student papers struggle with the reality of increasing deficits, which forces them to implement some difficult structural changes. According to an article in Maclean’s, the Journal ran a deficit of over $27,000 last year, forcing the paper down to one print issue per week. And as of last September, The McGill Daily—despite its name and history—cut back from two issues per week to one. In April 2013, the Lance had a deficit of approximately $30,000, 20 percent of its yearly budget, says Horwath.

Often, these deficits are linked to declining ad revenue. Many businesses that once advertised in campus publications now choose to spend ad dollars online, including on sites such as Facebook. Internet ad impressions, the logic goes, can be quantified, measured and tracked. Before it went bankrupt in June 2013, Campus Plus sold ads for dozens of student-run papers across Canada. Now publications are scrambling to find advertisers on their own in a grim market. “Everyone saw a severe decrease in ad revenues for the papers,” says Adam Young, who sits on the board of directors of Canadian University Press. “As much as we feel like we’re the demographic ad agencies want and are interested in, it’s still struggling to get that revenue up.” Often, student governments, or the organizations they fund, are the most prominent ad buyers.

There is a way for editors and reporters to operate freely, says McElroy. “It’s messy when you have to deal with it, but there is a solution. It just takes a little bit of nerve from the people involved.” The Ubyssey held a referendum in the mid-1990s that resulted in the student body agreeing to pay $5 a year to a new non-profit organization. The Ubyssey Publications Society bought the rights to the Ubyssey name from the student government and has published the paper independently ever since.

In 1970, journalists at Wilfrid Laurier realized there was strength in numbers and formed Wilfrid Laurier University Student Publications (WLUSP). The autonomous organization, which launched a campaign for a referendum to circumvent the student union when receiving fees, includes campus paper The Cord, a yearbook and a radio station. Bryn Ossington, WLUSP’s executive director, says the organization now receives fees from the university directly. He says being independent from the students union “frees us up from campus politics.”

Combining forces with other student groups or establishing non-profit organizations is just as possible today. In fact, social media and online petitions should make it easier, faster and cheaper to launch campaigns for truly free campus media, even on a national level.

Student publications could be more creative when soliciting advertising. An improved online presence would provide advertisers with the metrics they need and allow readers to share articles. Editors could be more innovative in their coverage, making their publications relevant to the surrounding communities and a wider pool of advertisers. For example, York University’s official student paper, Excalibur, could aim to cover Toronto’s Jane-Finch community, a neighbourhood mainstream journalism notoriously misrepresents or ignores altogether.

One way or another, these papers must find a way to end the bullying by student governments. Otherwise, colleges and universities will lose an essential voice for democracy and accountability on campus—and Canadian journalism will lose a crucial training ground for the next generation.

Eric Zaworski was the Production Editor for the Spring 2014 issue of Ryerson Review of Journalism.

Eric Zaworski was the Production Editor for the Spring 2014 issue of Ryerson Review of Journalism.

Citytv is in the midst of major restructuring, which will bring major cuts across the board. Rogers Media, which bought...

There’s Something About Mary Lou

It's a crisp and sunny Sunday afternoon and I'm standing inside the sparse lobby at the University of Toronto's Innis...