With a quarter of a million immigrants arriving in Canada every year, publishers—big and small—believe this really is a land of opportunity 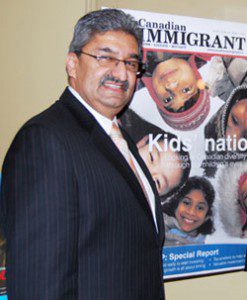 It’s three in the morning on a sweet April day in 2003, and Naeem “Nick” Noorani wakes up in his Vancouver home. Despite having left Dubai five years earlier with his family, he still finds something strange about this country. “Everyone says Canada is a country of immigrants,” he says. “There are magazines on wilting daffodils and three-legged squirrels, fishermen and furniture, but there’s no magazine for immigrants.”

A year later, Noorani launched an English-language monthly called Canadian Immigrant. The magazine swapped the tales of gangsters and “penniless losers” that he found so disappointing in Vancouver’s mainstream media for inspirational success stories, tips on how to get a job—as opposed to pieces about how hard it is for immigrants to find one—and the voices of those who had been discriminated against, devalued and disillusioned. By sheer coincidence, a month earlier in March 2004, Dale Sproule launchedCanadian Newcomer Magazine in Toronto, a service-oriented bimonthly publication for those who had arrived within the past two years. Since then, both magazines have grown and successfully carved out a new niche in Canadian media by pinpointing the aspects of the immigrant experience common to all ethnic communities.

It’s about time. With the immigrant population standing at upwards of 6.2 million, one in five people living in Canada were born elsewhere, and about a quarter of a million more come each year. By 2017, visible minorities may make up half of the population of Vancouver and Toronto. And that will only increase the media and advertising opportunities in ethnic publications, according to Albert Yue, managing director of Dynasty Advertising & Communications in Markham, Ont. “The whole thing feeds into itself and grows,” he says. In the last decade, an increasing number of advertisers—including financial institutions and companies that sell real estate, cars, entertainment systems and cell phones—have started paying attention to the cultural markets. “In advertising, the game is being stepped up and I think it would become more obvious in the next few years.”

In media, it’s obvious now. Canada has an estimated 560 ethnic publications, about a hundred of which are in English. And Torstar has shown that it wants to be a serious player in this arena. In 2006, Noorani started negotiations with Torstar on a deal that could take Canadian Immigrant national. By November of that year, the Star Media Group, a division of Torstar, was convinced of the concept and took over the magazine. “This acquisition is a perfect fit with our strategy to enter the multi-ethnic publication sector,” said Carol Peddie, vice-president of Business Ventures, in a news release. Besides publishing the largest Chinese newspaper in Canada, Sing TaoDaily, Torstar owns two ethnic lifestyle magazines: Sway (for African and Caribbean Canadians) and Desi Life (for South Asians), both launched within the last three years. According to Dave Frattini, now associate publisher of CI, the staggering numbers of immigrants entering Canada made the company particularly interested in this market. “This is one of the fastest growing audiences in the country,” he says, “so it makes sense that we try to reach out to this group of people.” The Toronto edition of CIdebuted in the spring of 2007 and has a circulation of 50,000; the Vancouver edition, which differs slightly, now has a circulation of 30,000.

Torstar’s acquisition had surprised Thomas Saras, president and CEO of the National Ethnic Press and Media Council of Canada, who didn’t expect the company to buy such a small English-language publication, but on the other hand, he adds, “I understand the strategy in creating an empire block in the market.” When a large corporation invests into these publications, it may discourage others from venturing into it. But Torstar’s move also legitimized the niche. In the last five months, Sproule, who is both the publisher and editor ofCNM, has noticed advertisers paying more attention to the magazine. Recently, CNM increased its circulation incrementally to 63,000 and widened its distribution to Barrie, Kingston, Ottawa, Peterborough, Sudbury and Thunder Bay, Ont. The expansion was made possible by a boost in government funding; Citizenship and Immigration Canada covers more than $30,000 per issue for printing and distribution.

As these magazines succeed, mainstream publications are gradually warming up to ethnic groups. In the last two years, Rob Roberts, Toronto editor of the National Post, has received more pitches about them from freelancers. “I’m 400 per cent more likely to accept a pitch from someone from a minority community who has a pretty interesting story about that community,” he says. “Any news outlet that doesn’t take a look around the city and want to reflect it better is making a mistake.”

Meanwhile, advertisers such as RBC and Rogers are finally showing interest in Canadian Immigrant. But why did it take so long for this market to be recognized? Frattini thinks that many companies initially failed to acknowledge that the immigration system now targets skilled professionals. New immigrants are not the manual labourers that Canada needed 50 years ago, though several misconceptions remain: “One of them is that immigrants don’t speak English. That is not true. That immigrants aren’t educated. That is not true. Thatimmigrants don’t have income-earning potential. That is not true,” explains Frattini. “We have to work at overcoming some of those erroneous perceptions.”

Guided by its “inform, educate and motivate” tagline, CI doesn’t merely report on immigrants, it analyzes the problems they face. The first issue profiled former B.C. premier Ujjal Dosanjh, tackled the topic of why foreign-born doctors were unable to practice in Canada and addressed the glass ceiling for visible minorities. Meanwhile, readers talked about their own experiences in a column called “Immigrant Impressions.” In May 2006, CI launched the annual Top Companies For Diversity Awards, and recent issues have incorporated ethnic community profiles, special reports—such as on the views of diversity by children—and a feature that plans to track a New Delhi family as it prepares to move to Canada.

Mainstream publications may have struggled to communicate with ethnic communities because of language barriers, but for CI and CNM, it made sense to print in English, the language that would enable immigrants to successfully integrate into Canadian society. CI reads at about a Grade 10 level while CNM is a level five to seven, according to the Canadian Language Benchmark levels. The key is to keep the writing simple without dumbing down the content. “To write effectively on a topic like this,” says CI editor Margaret Jetelina, “you have to make sure you don’t talk down to people.”

Early on, Sproule found it challenging to write at that level without being condescending, but it paid to recognize his readers’ intelligence. “The audience that I’m writing for,” he says, “is probably as educated as the audience that reads The Walrus.”

Mimi Szeto was the Senior Editor for the Summer 2008 issue of the Ryerson Review of Journalism.

Mimi Szeto was the Senior Editor for the Summer 2008 issue of the Ryerson Review of Journalism.

The manila envelope on Prue Hemelrijk's desk contains a manuscript, a landscape of computer ink on a cloudy white background...