Television news has been hit hard by layoffs and station closures. But earlier this year, employees at one Victoria broadcaster fought back—by buying the station and becoming their own bosses. Can this model save local news? 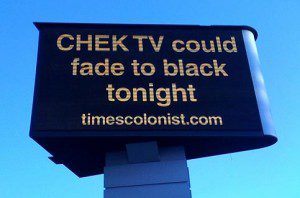 A warning of potential doom—ripped from the Times Colonist’s headlines—on Blanshard Street in Victoria on August 31.
courtesy Bob Kendrick / CHEK

On a Friday afternoon late this past summer, Scott Fee, an anchor for Victoria’s CHEK News, sat waiting to tape what might have been the station’s final 5 p.m. newscast. Over a month earlier, Canwest Global—the station’s cash-strapped owner since 2000—had announced that it planned to shut down the money-losing station. Employees had been trying to broker a deal with Canwest all summer, but now, Fee’s future was out of his hands and written in the script in front of him. He looked up from his notes and read to the camera the day’s top story. “A deal by employees and several local investors has been accepted by Canwest,” Fee announced, poker-faced. “CHEK TV has been sold,” he continued, slowly breaking into a smile, “and is now not only your island’s own, but your island-owned.”

CHEK employees and local investors bought the station for $2 (on top of $2.5 million that was raised to cover the operating costs during the handover). A Canadian Radio-television and Telecommunications Commission (CRTC) hearing to approve the handover began on October 30, and a decision is expected in mid-November. The employees and investors will run the station as an independent broadcaster and become Canada’s first employee-owned station.

While television stations are losing money and shutting down across the country, CHEK journalists are making a statement. By putting their own livelihoods at stake, they’re voicing confidence that the future of broadcasting is not only in news that’s local, but news that’s locally owned as well. “We don’t need huge ratings points and as many dollars as corporate TV,” says station manager John Pollard, “but I think what we can do is prove to Canada that local TV can survive.” The group’s strategy is simple: keep the operation small. The station will reserve modest profit expectations, while keeping a narrow focus on what it does best: local news. And though ethics experts question the idea of journalists with a direct financial stake in their work, debt-ridden news outlets across the country may find themselves looking to what the 53-year-old station has done as a model that could work for them, too. Employees in employee-owned companies do end up saving their own jobs, after all, but is that enough to save local news?

CHEK employees think so. They’ve shifted their 11 p.m. newscast to 10 p.m., a move they hope will generate larger audiences. They’re also toying with the idea of producing shows based on local interests such as gardening and home repair, which Pollard refers to as “DIY programming.” Levi Sampson—one of CHEK’s main investors, who organized a similar employee buy-out at the HARMAC pulp mill in Nanaimo last year—believes that keeping a local focus can help make the station profitable again. Under Canwest, he says, money was wasted on importing expensive prime time programming from the U.S. “You can’t make enough advertising dollars to make it up,” he explains. Instead, the station will now air programming it can produce itself at a lower cost. 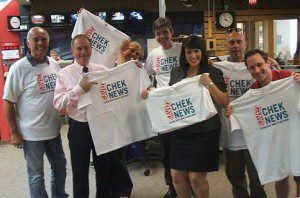 Under the new model, Sampson and a small group of local investors comprise about 70 percent of CHEK’s ownership. These investors form the board of directors, but aren’t involved in day-to-day operations. The station’s 45 employees dug into their own pockets to raise $500,000, giving the group about a 30 percent stake in the company. The management remains intact, but employees now have more opportunities—an internal blog, for example—to voice their thoughts on how the company should be run.Just five years ago, I was a student,” the 35-year-old Fee says. “If someone had told me five years ago that I’d be a co-owner of a television station…it’s unbelievably surreal.” He says it’s been a steep learning curve, but already an owner mentality is starting to form amongst employees. “You’re concerned about more than just the story you’re working on,” he says. “You’re worrying about the company as well.”

This idea of owner-operator journalists does, however, raise ethical questions. Journalists pride themselves on separating editorial decisions from business ones—a difficult distinction when reporters have their own pocketbooks on the line. Dave Secko, assistant professor of journalism ethics at Concordia University, says that as the line between journalist and entrepreneur becomes blurred, more and more focus from the public is placed on journalistic independence. Because of this, Secko says, conflict of interest—real or perceived—and public skepticism will have to be managed carefully. But Rob Germain, CHEK’s news producer, doesn’t see this as a problem. “We realize that as journalists, it’s our integrity that’s valued more than anything,” he says. Selling out will turn off audiences, and without an audience, he explains, “We won’t have advertisers.”

As for whether this model could succeed elsewhere in the country, CHEK employees don’t see why it wouldn’t. Pollard says it can work for local television all over Canada, as long as there’s a large enough population base. According to Pollard, Victoria—with a population of about 80,000, or 345,000 including suburbs—is a big enough city to garner national advertising dollars, imperative for any television station.

But others, including Duncan Stewart, who runs his own Toronto-based media consulting firm, DSAM Consulting, disagree. Unlike Pollard, Stewart is doubtful that a city of Victoria’s size can generate adequate advertising, and says an independent broadcaster would be generally more vulnerable to dips and lows in the economy. Although he’d like to see the CHEK model succeed, it likely won’t. “It’s important to remember that the Aspers weren’t idiots,” says Stewart, who until recently wrote a column for the National Post. “They knew how to do this stuff.” Nor does he buy the argument that sticking to local content will keep CHEK afloat. “That strategy has been tried many times in Canada—but it may not draw advertising and ratings enough to justify the cost of doing it.”

John Morton, a media-industry analyst and columnist for the American Journalism Review, echoes Stewart’s concerns. Morton has studied employee-owned media companies in the U.S., and says that so far, similar models in the States have been unsuccessful. Part of the reason for this, Morton says, is that a switch in ownership doesn’t change the surrounding economic conditions. “Employee-ownership is not a panacea,” he says. “All the things that plagued the station before likely will remain.”

Regardless, CHEK employees are pleased that they’ve made it this far. “You wouldn’t believe the atmosphere in the newsroom,” Graham Barnes, one of the major investors, says. “These people own the station. They are in charge of their own future.”

London News Is Falling Down

Nick Paparella is famous for sinking his teeth into his stories. He declares the winning rib recipe at Ribfest, barbeque...

Black and White and Green All Over

The day The Financial Post's June 1989 issue of Moneywise hit the newsstands, the magazine's editor, Catherine Collins, went out...