When Milt Dunnell died this month, Canadians lost a great sports columnist, one who told stories with the class befitting a man known as the sports editor of Canada 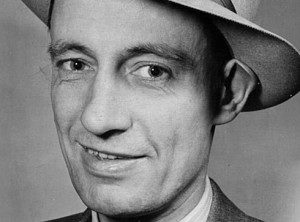 Milt Dunnell, who was one of the greatest sports writers in Canada, in an undated family
(Photograph
courtesy Mike Dunnell and the Toronto Star)

It was the year of our Lord nineteen hundred and eighty eight, and never a more decisive victory had taken place in the ring of battle since Napoleon wiped out the Third Coalition at Austerlitz. In the first round, Mike Tyson walloped Michael Spinks, felling him in a flash, or 91 seconds if you want to get real specific.

And in the overwhelming tsunami of ink-stained wretches men call sports journalists, in the dungeon of the ringside press section, one old fellow surely must have stood out. Alternatively called “Mr. Sports” or “Uncle Miltie” around the office, Milt Dunnell, 82 years young and on arthritic and spindly legs, and facing a deadline despite officially retiring 18 years earlier, leapt over a table to get to the press room and bring the story in.

When Dunnell died on January 3, 2008 at the age of 102, he entered Sports Writers’ Valhalla for his mastery of the genre. He simply told great stories without a lot of flash or pizzazz. The Star’sJim Proudfoot once said, “Milt, in effect, was the sports editor of Canada. Other papers, TV, radio, all followed what he did, what he wrote. He set the tone for the whole country.”

Dunnell started up in the minor leagues, working in his spare time at the St. Marys Journal Argus, eventually making his way to the big time game at the Toronto Star, where he became sports editor in 1949.Every day for him was a new hustle for a story. Before he retired, he wrote seven days a week; after her retired he wrote five days a week for for 22 years, scoring some 11,000 columns for the Star over his career. He was still fast as ever, getting news as it happened. His last column was on why the Toronto Blue Jays should acquire Larry Walker in a trade.

Globe and Mail sports editor Steve McAllister says Dunnell had a rare gift for “folksy-style” storytelling. To quote the poet about the 1966 epic between Muhammad Ali and George Chuvalo, “They had a contest between a bull and a bumblebee at Maple Leaf Gardens last night — with the usual result. The bull came out of it with his face looking like a bucket of balls at a golf driving range.” To McAllister, reading such lines felt like listening to a sermon. In today’s times, he says, “We’ve lost a bit of that storytelling.”

When Dunnell finally gave up writing about sports for good in 1994, he wanted no gift, farewell luncheon or even an announcement on the bulletin board. “Save it,” he insisted, “for my obit.”

He was never one for spectacle. Unlike many reporters, he wouldn’t use “I.” When he had to bring himself into a piece, which wasn’t often, he opted for “we.” Stephen Brunt, a Globe sports columnist, says Dunnell knew he wasn’t the show. “The show was what he was bringing back to his readers.”

Now, press agents, press conferences and pressrooms all mean sports reporters often become the story. Brunt says today’s sports columnists try to brand themselves. They write what they think of the players and hotshots, or try to play the numbers, putting in a whole lot of statistical analysis.

But don’t for one solitary second think Dunnell was a wallflower. When he was on CBC’s Sports Hot Seatshow in the 1960s, he made the seat hot by jabbing athletes with tough questions, backed up by his unstoppable recall.  It got so bad that some irate fan threw a brick through his window.

This was a real shocker to his compatriots in sports journalism because the Milt they knew was not a combative or even a loud guy. At a time when on-the-job drunkenness was not just a perk but an expectation, Dunnell exercised a regime of not drinking, smoking or cursing — which isn’t to say he was completely free of vices. In a casino after retiring, he complained that he hadn’t gone to Florida because he couldn’t afford the health insurance. Then he pulled a wad of $100 bills out of his pocket and began playing at a blackjack table.

When he really wanted to win a bet, he could. Before one Super Bowl, Dunnell bet Duncan MacPherson, theStar political cartoonist,that it wouldn’t rain on the field 24 hours before game time. MacPherson, failing to notice the venue was the Louisiana Superdome,took the bet. As he once explained to fellow scribe Pat Hickey: “It’s not gambling if you win.”

He was real slick that way, even more so in the way he treated athletes. Ali’s famous boxing trainer, Angelo Dundee, asked for him by name when he came into town.He appreciated that Dunnell saw past the game and into the people who played it, and that when he was in a locker room, he melted into the scene rather than banging into it. As Dundee said, “He was so smooth.”

William Stodalka was the Visuals Editor for the Summer 2008 issue of the Ryerson Review of Journalism.

William Stodalka was the Visuals Editor for the Summer 2008 issue of the Ryerson Review of Journalism.

Earlier this year, Pakistan won its first Academy Award for the short documentary "Saving Face," about women who are victims of...